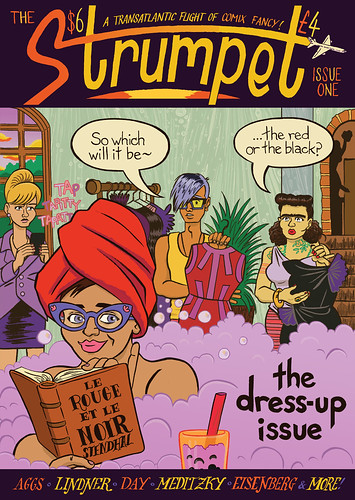 Cover to Issue 1 by Ellen Lindner

For the last year

ellenlindner have been talking about ways of restructuring Whores of Mensa so that it can grow without the fear of a copyright injunction. The success of our Party Issue convinced us that bringing in new artists was something we wanted to do on a regular basis - so, what next?

Enter The Strumpet. We started talking about how she could be our Alfred E. Neuman or Eustace Tilley...someone who embodied the smart-and-sexy ideals of Whores of Mensa, but had a new identity. Our intern, Elliot Baggott, started designing a new logo. And we started talking to contributors.

Some may wonder what the purpose of a comic book that only publishes women could be, in this modern world of equal opportunities. As an experiment, I did a survey of three of the top independent comics publishers in the UK publishing original stories (as opposed to adaptations). In one case, out of 21 artists listed on their website, only one was a woman. In the second, out of nineteen original projects published (discounting anthologies), only two had women as the creators. In the third, out of seventeen recent books, only three had a woman author (two by the same person, neither from the UK). We could discuss the reasons why this condition exists - and everyone's got a theory. But the fact remains that the vast majority of original work by women in the UK remains unpublished in the traditional sense - and until that changes, the Strumpet will be there. DIY, baby - DIY.

Strumpet Issue 1 will début at this year's Thought Bubble Festival, 19-20 November in Leeds. We'll be launching the comic on 24th of November at the Miller pub in London Bridge. And we have a group of contributors to drool over: Kripa Joshi, Patrice Aggs, Tanya Meditzky, Jeremy Day, Mardou, Lisa Eisenberg, Ellen Lindner, and...MEGAN KELSO!!! And more! AIEEE!!!!!

Right now we're taking pre-orders over at our Kickstarter page - if you want to be one of the first to reserve a copy of Issue One for your very own, I suggest you act quickly!

Kickstarter is brilliant - it's easy to use, fills the gaping distribution hole left by Diamond, and enables us to keep all of our titles in print (as well as pay for extra expenses like contributor copies, review copies, and postage). So please, have a think, and pre-order at the level you're comfortable with. All of the prizes are fab - and you'll be making a band of Strumpets very, very happy.